As I mentioned in my last post, I am now the owner of a beach hut.
The location of my hut is at West Brook Bay, a quiet little beach just round from Margate which I’ve been visiting since I was about six or seven years old. It’s my favourite beach and is where I’ll often be found during the summer season. Throughout the process of getting our hut we have collected gadgets and gizmos a plenty -you just sang that, didn’t you?-, along with numerous DIY and decoration bits and bobs for the hut as well. It’s been a long -yet fun, process of getting everything ready for the day we finally moved into the hut: the 1st of April.

When April finally swung round, excitement was in the air as we all fell into the car and headed to the bay to see our hut being put up. That day was pretty special and marked the beginning of a beautiful chapter in our lives; where we would make some amazing memories with friends and family as well as meet some new friendly faces. The process of getting everything in place has been some-what longer than we thought -purely because it’s our first year there and we’re learning as we go along. As I write this now we are in the middle of painting and ‘DIY-ing’ which is a fun process; I feel like we’re on some sort of DIY show, transforming the place into our own little oasis.

Naturally, I have taken a ton of photos over the course of time, which of course hope to put up here in due course; there truly are so many that I think it best I just stick to the ones from the first day…

Though there were clear skies and glorious sunshine, there was also super strong wind which was a little too tough for my dry skin but ultimately what I needed to knock the stuffing outta me! 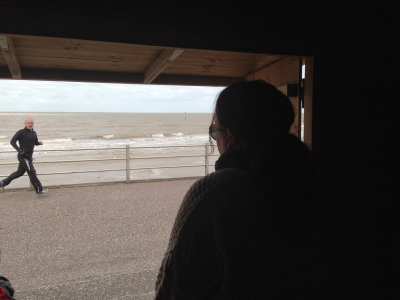 Having now spent a fair amount of time down at the bay, we’ve become familiar with the regulars. A lot of them are dog walkers like the lady with the golden retriever who always stops for a chat, and the dude with the dalmatian -who’s name is Bonnie; then this guy. Having seen him several times, on his regular jog I have subsequently named him ‘the running man’ and am convinced the emoji was made with him in mind… I’m not a people watcher or nothing though…

My keys! After finding out we were getting a beach hut, I instantly knew what key chain I had to get for the keys. When I think about the beach I automatically think of fish and chips; so naturally this keychain is the perfect fit! I got it from a boutique called Mosaic in Whitstable. I have quite a few key chains from there already, so, naturally, why not keep the collection going!?

As I said before these are just a few of my photos taken throughout this process; I have truly taken a ton of photos! So apologies in advance for the many ‘photo-&-commentary’ posts coming your way. I think it’s evident that when I’m fit and able to leave the house I go a little snap-happy.