Skip to content
The Picture of Dorian Gray, Oscar Wilde. 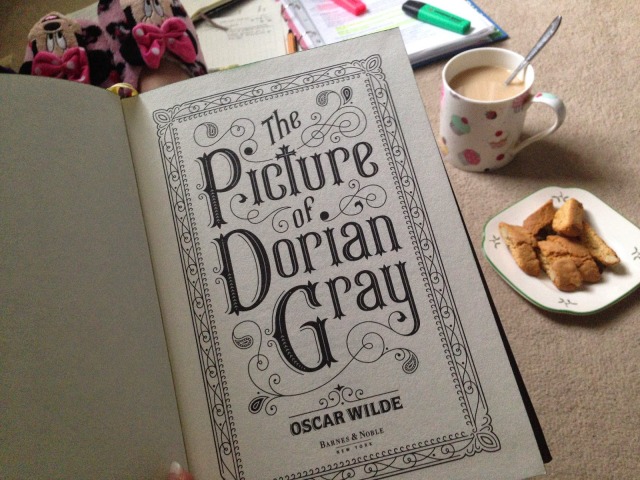 I have been wanting to read this book for many years, but over time obstacles, and life in general, have got in the way. The Picture of Dorian Gray has always been lurking on my ‘to read’ list and I have always been oddly drawn to quotes by Oscar Wilde so last year I finally bit the bullet and plonked that book at the top of my reading list. That top place is sort of a sacred spot on my list and serves as a huge billboard for my friends and relatives to gage how badly I want a book depending on its status (ranking) on my list; which is usually drafted and then handwritten until it’s just right. I know, I know -I sound sad; but whats a girl to do when she’s bedridden and has nothing better to do with her days but dream about the books she wants to read.
I received this book for christmas, and cracked it open over the holidays whilst on my break from uni. I was definitely drawn to the story within the first few chapters but between pacing myself for christmas and family events I didn’t manage to complete it before returning to my uni work. Over the past few weeks, of reading, note-taking and general work and preparation for my final assignments, I have found myself relentlessly finding any and every possible distraction to try and avoid doing those important tasks. This led me back to my half-read book and I once again returned to the gothic novel, though this time I was accompanied by a large mug of tea and a few pieces of cantuccini.
The Picture of Dorian Gray starts at Basil Hallward’s studio where he is to stand and have a portrait painted by the artist himself. While there he encounters Lord Henry Wotton, whom he becomes increasingly fascinated with and befriends in an instance. Dorian, an eighteen year old young fellow at the time, is convinced by Lord Henry that his most valued possessions are his beauty and youth. Later, having seen his portrait and heard both Basil and Lord Henry marvel at his youth and beauty, he’s prevailed by his emotions and wishes that the portrait would age with time rather then himself. After, he continues with his days and enjoys the company and cynical words of Lord Henry, without thinking of the portrait -til one night, he notices its appearance has changed and he realises that the words he exclaimed in Basil’s studio had came true and the true nature of him and his soul was being displayed on the portrait rather than himself.
The book is noted as a modern classic of literature, as well as the only novel wrote by Oscar Wilde acting as a showcase for his writing talents. The story itself is fascinating, with long-standing morals of society and slightly comical moments throughout. Wilde’s storytelling talents are mesmerising, complete with beautiful, almost poetic, imagery and complex yet innovative characters; all including personal traits of the author himself.
Favourite Quote: “But the picture? What was he to say of that? It held the secret to his life, and told his story. It taught him to love his own beauty. Would it teach him to loathe his own soul? Would he ever look at it again?”
What Classic’s have always caught your eye?
Cheerio for now!
Instagram | Twitter | Pinterest | Tumblr | JustGiving

1 thought on “Book Review: The Picture of Dorian Gray”